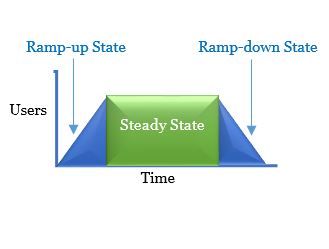 Performance Test Workload refers to the distribution of load across the identified scenario. Performance tester prepares a workload to simulate the real-world situation in the performance test environment. In performance testing cycle, different workloads are created to study the behaviour of the system under various loads and conditions. Sometimes the workload is also known as a scenario.

What is Workload Modelling?

The process of creating a performance testing scenario with the help of non-functional requirements and performance test scripts is known as Performance Test Scenario creation or Workload Modelling.

Performance Test Analyst or Engineer (designation may vary as per company policy) has a responsibility to prepare the performance test scenario exactly the same as mentioned in the Performance Test Plan.

The designing of workload comprises of various calculations but the ultimate aim is to achieve the desired goal in various terms. These terms could be the number of users, transactions per seconds, hits per second, throughput etc. Workload model helps to design a predictable (stress test), repeatable (regression load test), scalable (stress/breakpoint test) and sustainable (endurance test) scenario. Before designing a workload model, it is important to collect all the relevant information which helps to create an effective workload model. Such information is available in the Performance Test Plan.

Now, collect the respective metrics for all the identified scenarios. List of workload metrics is:

Does a performance tester need all these metrics to design a scenario?

No, to make it easy, understand the category of the workload metrics:

It is not worth to say that basic metrics cannot be targetted. The purpose to divide all the metrics in the category is to provide a basic understanding of the workload model. The advanced level of workload will be discussed later.

In order to design a basic workload model, 2 metrics are very important. The performance test plan must have the value of these two metrics:

The example of workload modelling is itself a big topic. Refer the next post to get a practical understanding of Workload Modelling/Scenario creation.