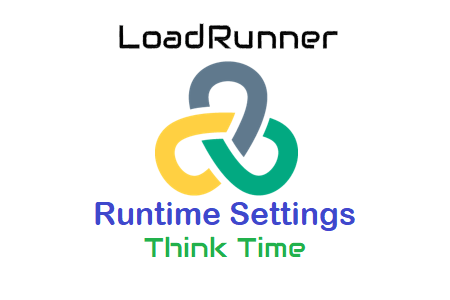 Think Time setting is available under the ‘General’ category of ‘Runtime Settings’ in LoadRunner. Refer to below screenshot. (For more details What is Think Time?)

Before elaborating the think time setting, you must understand how does LoadRunner pause the Vuser. Actually, LoadRunner uses lr_think_time() function to add a delay (or think time) between two transactions. This function pauses the Vuser for a given period of time and then release.

Note: Do not use lr_think_time() inside a transaction.

How to insert think time in the LoadRunner script?

Write down the lr_think_time(); function in between two transactions and pass a positive integer number as an argument of the function. The argument value will be considered as a think time in second(s).

Example: lr_think_time(10); // Vuser will wait for 10 seconds before starting the next transaction.

What are the settings available for Think Time?

There are four settings available for think time settings in LoadRunner:

Choosing this option instructs the Vuser to ignore the given think time [lr_think_time()] in the script and run the script without any delays in between two transactions. This option is helpful during replay and debugging the script. Also, this is a default setting. ‘Limit think time to XX seconds’ option is disabled for this setting.

Pass Think Time as a Variable:

Other Setting on Think Time tab: