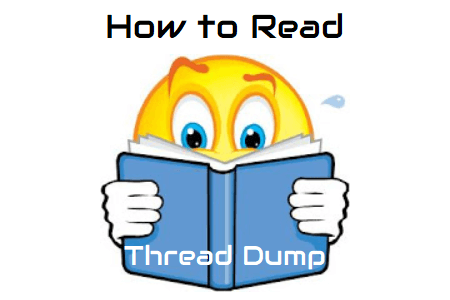 In the previous post, you have seen how to generate Thread Dump on the different operating systems. After generating the Thread dump, the next question comes which is “How to read Thread Dump?”. Thread dump provides some generic information in the first part and the later part has the detail of Thread which is used for analysis purpose. Let’s try to understand them with an example:

If you have any Thread Dump then open it either in Java VisualVM or Notepad++ and compare with the below statements.

1. The first row shows the timestamp of the thread dump generation in below format.

2. The second row shows the JVM information from which dump had been generated.

3. Next information is related to the threads. Please refer the below lines. There are two threads shown below which are having relative information; helps to analyse the dump. Follow the colour code to see the description of fields:

When java.util.concurrent.ThreadFactory class generates a thread, then thread will be named pool-<number>-thread-<number>. As per the above example, the first thread having name pool-3-thread-1.

When Java.lang.Thread class generates a thread, then the thread will be named Thread-<Number>. In the above example, you can see the second thread having the name “Thread-4”. Actually, the thread name is given in the human-readable format so that analysis can be made easy.

This number represents the unique ID of the thread. It starts from 1 and then increments and assigned to a newly created thread. This thread ID is very useful to get the information like CPU usage and memory usage of the thread. In the above example, #37 and #34 are thread IDs of respective threads.

The priority of the thread in OS term. You can see 0 and -2 are os_prio of respective threads.

The memory address of the Java native thread object.

The unique ID of the OS thread to which the Java Thread is mapped.

The status of the thread when the thread dump was generated. We have already discussed all the states of a thread in the Life Cycle of Thread post.

Stack Point and rest of the tags:

1 thought on “How to read Thread Dump?”