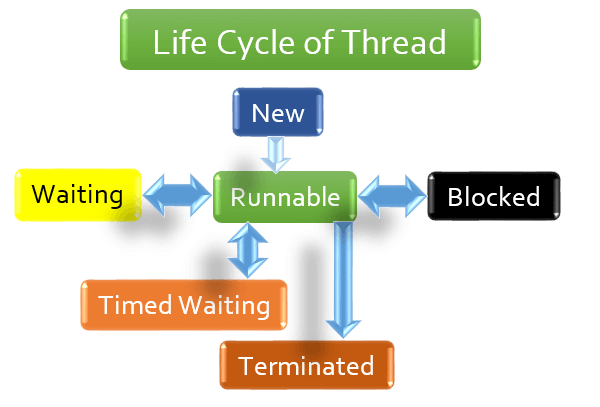 This is the initial state of the thread. When a thread is created, it is in the new state. The thread has not yet started to run when it is in this state.

A thread that is ready to run is moved from New to Runnable state. In this state, a thread might actually be running or it might be in Ready To Run state. Once the thread comes in the Runnable state then it occupies the CPU and starts processing the code. In this state, there is an intermediate state called “Ready To Run”. Such state comes because every thread runs for a short while and then pauses and relinquishes the CPU to another thread so that other threads can get a chance to run. But all such threads lay under Runnable State whether they are in Ready To Run or currently running state. It is the responsibility of the thread scheduler to give chance to each thread to run.

A thread lies in the state of timed waiting when it calls a method like wait(), sleep(), join(), park() with a timeout parameter. A thread lies in this state until the timeout is completed or until a notification is received.

When a thread terminates then it frees the occupancy of CPU and no longer exists. A thread terminates when either the program has been executed completely or some unusual erroneous event, like segmentation fault or an unhandled exception occurred.

There are two types of Thread.

1 thought on “Life Cycle of Thread”