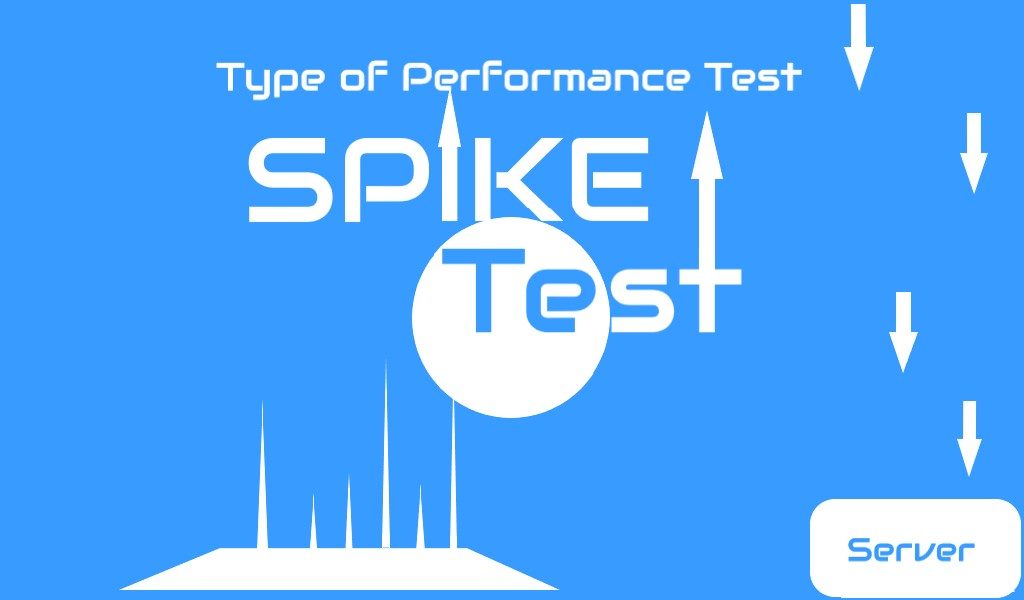 What is Spike Test?

Spike Test refers to a performance test which simulates a sudden high load on the server for a shorter period of time. This is a type of non-functional test which helps to identify the behaviour of an application or software system when an unexpected huge load arrives. The outcome of the spike test concludes whether the application can able to handle a sudden load or not. And, if it is then how much load?

Spike tests are of three types:

1. Constant Spike Test: A constant spike load applies to the server after a certain interval of time. In this type of spike test, all the spike have same height i.e. the same load.

2. Step-up Spike Test: A gradually increase spike load applies to the server after a certain interval of time. In this type of spike test, response time should measure at each spike and analyse how much it deviates from baseload response time?

3. Random Spike Test: A random spike load applies to the server at random interval. Such a test is conducted for an application that frequently gets spikes in the production environment.

How to calculate Spike Load?

The business analyst analyses the historical data and checks if any of the sudden spikes appeared in the past. As per his analysis, he suggests the number of users for spike load. He may also predict the numbers by analysing the company’s requirement. For example, if a company has a plan to conduct a flash sale or one-minute sale then he needs to calculate the spike load as per the registered and active user count. Although there are multiple methods to calculate the spike load which a business analyst must aware. This is not a task of performance tester. A performance tester has a responsibility to design the workload model as per spike test requirement.

To handle the same situation in the future, a spike test performs in the test environment and tune the application in case of any issue occurs.

A performance tester prepares the workload by referring to the spike test NFR. NFRs must have the defined Base Load and Spike Load so that an accurate workload can be created. Ideally, the duration of the spike test is 1 hour (excluding ramp-up and ramp-down period). The typical spike user graphs are shown above (Figure 1, Figure 2 and Figure 3).

It is recommended to plan at least 2 identical spike tests in a single performance testing cycle and if both the tests have consistent results then only jump on to next type of performance test.