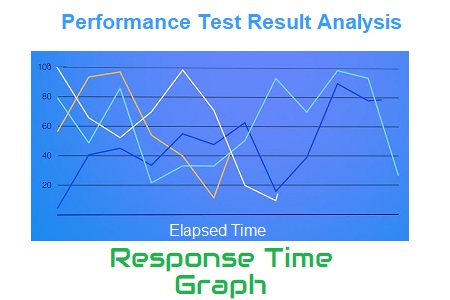 Response time graph gives a clear picture of overall time including requesting a page, processing the data and getting the response back to the client. As per PTLC (Performance Test Life Cycle), the Response time NFRs should be discussed and agreed during the NFR gathering phase and then compared with actual response time which is observed during the test. Many times the application is brand new and does not have any response time NFRs, in such a case you need to adopt the Step-up Load approach. During the step-up test, you have to note down the response time pattern at different load and share the analysis with the business analyst (BA) to get the confirmation on acceptance of the result.

Generally, the response time of a website at a normal user load falls in the range of 3 to 5 seconds although for a web-service it is less than 1 second or even in milliseconds.

Every performance testing tool has its own term to represent the response time graph, some of them are below:

Apart from the stability, another important thing is all the defined response time NFRs should be met. A flat line of response time within SLA shows the application may perform as expected on the other hand fluctuation represents performance may vary from time to time.

The bottom table may have some columns like line colour, min, max, average, 90th percentile, deviation etc. The numbers in the table are used to validate the defined NFRs.

Remember: Table numbers may change on changing the granularity of the graph.

Merging of Response Time Graph with others

Remember: Before making any conclusion, you should properly investigate the root cause of the performance bug by referring to all the related analysis graphs.