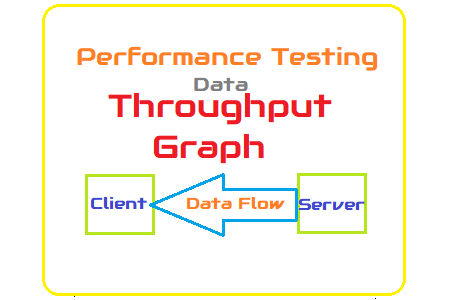 As per standard definition, the unit of information a system can process or transfer in a given amount of time represents Throughput. If you use both LoadRunner and JMeter then you may get two definitions of Throughput. In LoadRunner, throughput is the amount of data sent by the server to the client. On the other hand, JMeter represents the number of requests sent by a client to the server. Although JMeter has separate ‘sent bytes’ and ‘received bytes’ graphs.

The graph line shows how much amount of data sent by the server in per second interval. As I explained in the graph’s purpose section using a throughput graph you can get an idea on network bandwidth issue (if any). A flat throughput graph with an increase in network latency and user load shows an issue in network bandwidth. Apart from this if throughput scales downward as time progresses and the number of users (load) increase, this indicates that the possible bottleneck is at the server end. In that case, you need to merge the throughput graph with error graph, user graph and response time graph to identify the exact bottleneck.

Merging of Throughput graph with others:

Remember: Before making any conclusion, you should properly investigate the root cause of the performance bug by referring to all the related analysis graphs.