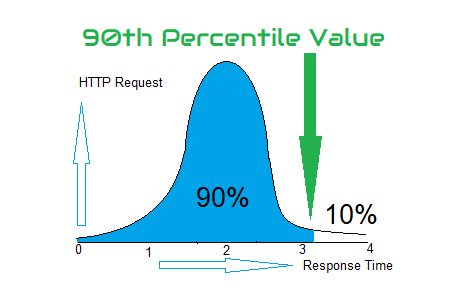 Let’s try to understand with an example. If you had 10 sheep and each sheep eat some KGs of grass on a daily basis. One day you weighted the grass and noted the figures of each sheep’s intake. Refer to the below table:

Now, you need to find out what amount of grass has been consumed by 90% of sheep? So simply you need to sort the number with respect to consumed grass and ignore the last value.

The conclusion is 90% of total sheep either eat 4 KGs grass or below, so you got an upper limit of grass consumption. In terms of performance testing, you need to sort response time of a particular transaction or request in increasing order and then ignore 10% of the total count having high values. The last highest number in the remaining values will be 90th percentile.

A performance test script is executed for 25 iterations. The response time of the login transaction of each iteration is:

Now, sort the list in increasing order with respect to response time.

Round-off to 23. So the 23rd value will be 90th percentile which is 1.9 seconds. It means 90% of total iterations having response time 1.9 seconds or less than it. Similarly, you can calculate other percentile values like 70th, 80th or 95th percentile.

Why we need 90th percentile in Performance Testing?

Percentiles are a really great and easy way of understanding the real performance characteristics of your application. They also provide a great basis for automatic base-lining, application behavioural learning and optimizing your application with a proper focus. However, averages are ineffective because they are too simplistic and one-dimensional.  In short, percentile (90th, 95th, 99th) is great in performance testing world!