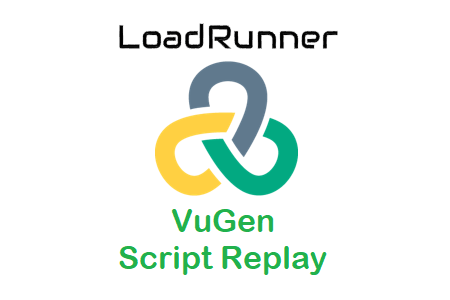 ‘Replay’ term in LoadRunner is used for VuGen script. You may need to replay the script many times to correlate the dynamic values, to check the replacement for parameters, to check the programming logic like if condition, for loop etc.

How to replay the VuGen script?

To replay the script for any of the purpose mentioned above you can choose any of the options given below:

When the Vuser script replay is completed then you can view a summary of the replay. The Replay Summary tab shows:

Note: If a summary of the actions and transactions does not appear, select Tools > Options > Scripting > Replay > Collect replay statistics, and then replay the script again.

Note:
1. The Output pane displays successful steps in green and errors in red. For example, if the Vuser was unable to connect to the server, the Output pane would display the error text in red, and indicate the line number in the script where the error occurred.

2. If you double-click a line in the Output pane, VuGen shows the corresponding step in the VuGen script editor.