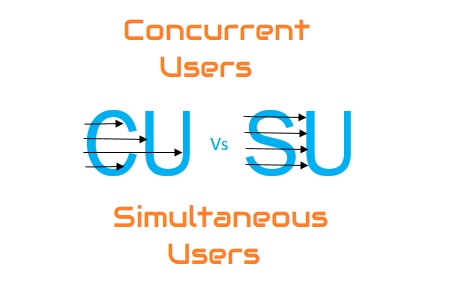 To understand the difference, I would suggest to know the meaning of these two words. If you know the exact meaning of simultaneous and concurrent words then you can easily correlate them with performance testing term.

The word concurrent is used only for the events that occur over a period of time i.e. for a span of time. In the performance testing term, you would say ‘a period of time’ implies ‘test duration’.

Hence the users which are running under a test plan; irrespective of the activities they are doing; are ‘Concurrent Users’.

The word simultaneous is used for the events that occur at a point in time. In the performance testing when you instruct all the users to perform the same transaction together then at that particular point those users become ‘Simultaneous Users’.

The feature of Micro Focus LoadRunner Rendezvous Point helps us to make Vuser simultaneous by holding the Vuser at a particular transaction and release them all together.

In the LoadRunner tutorial, there is one practice scenario which states:

Point 1 implies that application must be able to handle 10 travel agent load (over a period of time) irrespective of their activities. Hence they used the term ‘concurrent’.

Point 2 implies that the application must be able to handle 10 simultaneous bookings (at a point in time). That means all the travel agents must click the ‘Book the Flight’ button at the same time. You can simulate this scenario via rendezvous point.