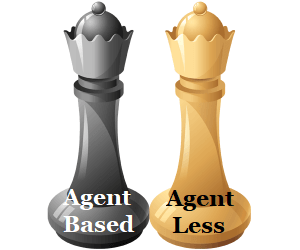 Before discussing the difference between agent-based and agent-less monitoring tool, let’s try to understand what is an agent?

What is an agent?

An agent is a proprietary software application installed on the server whose performance needs to be monitored. The agent resides at the server end and gathers the stats like CPU, Memory utilization etc. Then it sends all these stats to console (UI) for displaying the result.