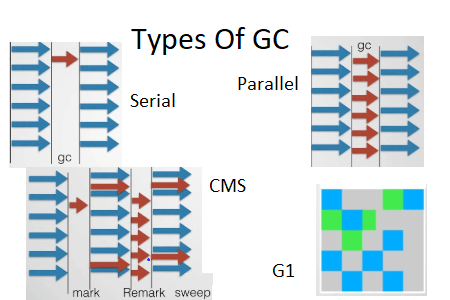 Before discussing the type of garbage collector, it is important to understand some basic terms related to it.

Serial GC is designed for single-threaded environments. It uses just a single thread for garbage collection. As a result, this GC implementation freezes all application threads when it runs. This leads to stop the world event. Hence, it is not a good idea to use it in multi-threaded applications like server environments. JVM argument to use the serial garbage collector is:

Use: Serial GC is a good option when you do not have low pause time requirements and GC runs on client-style machines.

This is also called as Throughput Collectors. Since it can use multiple CPUs to speed up application throughput. This collector should be used when a lot of work needs to be done and long pauses are acceptable. For example, batch processing like printing reports or bills or performing a large number of database queries. It is specially designed for multi-threaded environments. It uses multiple parallel threads for garbage collection. This GC implementation also freezes all application threads when it runs and leads to ‘stop the world event’. JVM argument to use the parallel garbage collector is:

You can also specify maximum garbage collection threads and pause time and throughput in parallel GC using the following arguments.

a. To control the numbers of garbage collector threads

where n = no. of GC threads

b. To specify the maximum pause time (a gap between two GC)

where n = time in milliseconds

where n = GC time vs outside GC time

Use: Parallel GC is helpful where a lot of work needs to be done and long pauses are acceptable.

1. marking the referenced objects in the tenured generation space.
2. if there is a change in heap memory in parallel while doing the garbage collection.

JVM argument to use the CMS garbage collector is:

To set the number of threads:

where n = no. of GC threads

Use: CMS GC is helpful when the low pause time is needed and resources (memory, CPU) can be shared with the garbage collector

G1 (Garbage First) Garbage Collector is designed for applications running on multi-processor machines with large memory space (larger than 4GB). G1 collector partitions the heap into a set of equal-sized heap regions (1MB to 32MB – depending on the size of the heap). The Eden, survivors and old area use this equal size region for the memory allocation of the objects.

Apart from Eden, Survivor, and Old (Tenured) memory region, there are two more types of regions present in the G1 GC method.

The Humongous region which is used for large size object whereas Available region shows unused space. While performing garbage collections, G1 shows a concurrent global marking phase to determine the live and dead objects throughout the heap. After the mark phase is completed, G1 knows which regions contain the most garbage objects, so those regions are swept first. It is why this method of garbage collection is called Garbage-First. JVM argument to use the G1 garbage collector is:

Some important points related to G1GC:

where n = time in milliseconds

where n = no. of regions

Use: G1 GC provides benefit where multi-processor machines along with large memory space are available. G1 GC gives better GC performance than others on a large memory system.