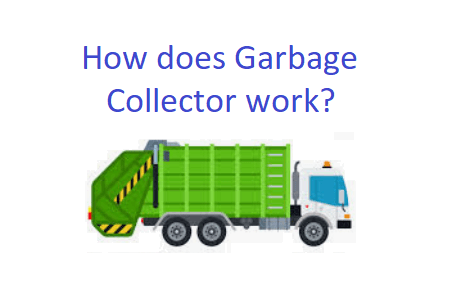 A Garbage Collector is a Java program which tracked the referenced (live) objects and allowed them to keep in the heap memory whereas the memory of the unreferenced (dead) objects is reclaimed and reused for future object allocation. To understand it more practically we have to take some pictorial examples of JVM object creation and management cycle. Let’s see how does Garbage Collector work?

When new objects are created by JVM then heap memory is allocated to each object. How? Let’s have a look of below example.

Let’s consider the limit of Eden is 5 i.e. only 5 objects can accommodate in Eden at a time. The name of these objects as A, B, C, D and E. When these 5 objects are created, respective memory is allocated to them in Eden under the young generation.

When Eden limit is over:

In our example, you can see object A, B and E are live objects whereas object C and D are dead objects.

New Object Creation and Memory Allocation along with unreferenced objects:

One more time the first step repeats and new objects are created by JVM and heap memory is allocated to each object. This time new objects F, G, H, I and J are created and Eden memory space is allocated to them. The only difference in the first step and this step is; this time some objects are available in the S1 as well, so now we have a total of 8 objects. During this activity, some of the objects in the Eden as well as in S1 may dead like object ‘B’ and ‘I’.

Since the Eden memory is full so this situation again leads minor GC. Here one point to be noted that minor GC is a periodic process whenever Eden memory limit is over and every time it does the same tasks which I have mentioned above. Now, the live objects F, G, H and J will move to S2 along with A and E which exist in S1. The dead objects B and I will be removed and Eden memory will be reclaimed.

There is one more process which takes place along with all above-mentioned activities i.e. Object Promotion. After each minor GC, the objects become old and their age keeps on increasing. When aged objects reach a certain age threshold they are promoted from the young generation to the old generation. This process is called as Promotion.