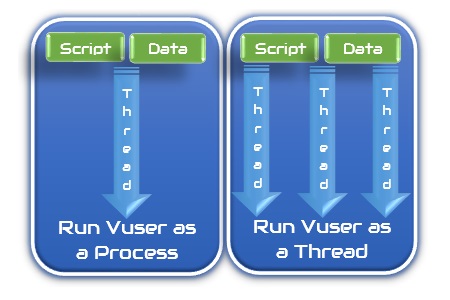 The feature of multithreading in LoadRunner has been introduced to generate maximum load through Load Generator so that large number of Vusers can be accommodated on the available LGs. Actually, multithreading favours running multiple Vusers concurrently on a system. Hence LoadRunner had to add this feature in the list. This feature gives an option to enable the multithreading mode of the Vusers as per requirement. To enable it you can go to:

Here, you will find 2 radio buttons “Run Vuser as a thread” and “Run Vuser as a process”. You need to select one of them for your test. What are the criteria of selection that will be discussed later in this post?

As per Java Multithreading definition, both processes and threads are independent sequences of execution, so running a Vuser as a thread or as a process is an independent task for each Vuser. Having said that there are some major differences  between both the options which are covered below:

Example: If 10 Vusers are running as a thread then there will be only 1 mdrv.exe process in the task manager whereas you can see 10 different mdrv.exe processes while running the test with Run Vuser as a process mode.

If the application supports multithreading feature then the Vuser script will also support multithreading and you can choose Run Vuser as a thread mode.

Additional Information on Process and Thread:

Virtual address space, global variables, open files, child processes, executable code, a security context, a unique process identifier, a priority class, minimum and maximum working set sizes, and at least one thread of execution all these are associated with Running Vuser as a process.