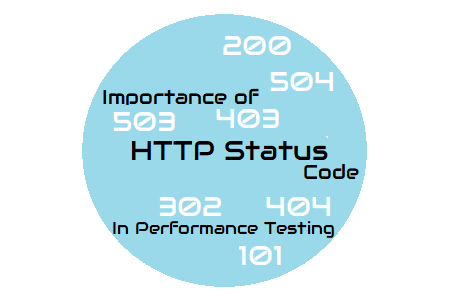 HTTP status code is a common and very useful term in performance testing. Any performance testing tool primarily validates HTTP Status Response Code to mark a request as pass or fail. Many times you have seen HTTP 500/404/403 as a response code while playing back the script and that leads you to debug the script. Such type of issues may occur due to no or wrong correlation, wrong test data, server issue etc.

To deep down little more, HTTP (Hypertext Transfer Protocol) is the method by which clients and servers communicate. When someone browses a URL, clicks a link on a webpage or submits a web form then the browser sends a request to a server to get the related response. That web request sent by a server is called an HTTP Request. When a server receives that request, it sends back an HTTP Response, with information for the client.

How does a performance testing tool work with HTTP?

When you record an HTTP script in the performance tool like LoadRunner, Apache JMeter then the tool captures all of the communication between the browser and the server. The captured info becomes part of the script, which is then played back. When you run the script, it interacts with the web application just like a real user. Here, one point you need to note down “The performance testing tools never work as a browser, they just simulate the real user activity”

What are the types of HTTP status code?

HTTP status codes are categorised into five classes which are:

It indicates a provisional response, consisting only of the Status-Line.

It indicates that the request has been processed successfully

It indicates that your request has not been completed and needs further actions.

Note: The response containing redirection class HTTP code is considered as passed in Performance Testing; provided that redirection has been fulfiled the request and correct response has been sent to the client (end users)

Note: The response containing Client Error HTTP code is considered as failed in Performance Testing and required investigation in the script. The reason for such errors could be wrong URL, wrong value of header or body field, authentication issue etc.

All errors fall under this category indicate a server-side issue.

Note: The response containing Server Error HTTP code is considered as failed in Performance Testing and required investigation in the script as well as server-side.

Re-check the request URL. The most common reason for a 400 Bad Request error is because the URL was typed wrong or the link that was clicked on points to a malformed URL with a specific kind of mistake in it, like a syntax problem. The wrong value in the header field may also cause 400/Bad Request.

Many times script recorded successfully but failed during replay with HTTP 500 internal server error. Although this error comes under the server error category, it may be occurred due to wrong correlation. Hence again check the script and capture all the dynamic value correctly.