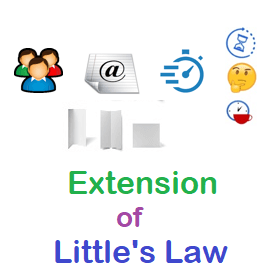 To simulate the real-world scenario in Performance Testing, a performance tester needs to develop workload model which comprises of user load, the request rate sent per hour and response time of the page. These three metrics are adjusted by Little’s law so that the desired load can be generated on the server. Many times, when a performance tester use Little’s law (as it stats) to build an accurate workload model then he finds some unexpected results and after that, he needs to do manually some reverse or complex calculations to generate the desired load on the server. As a solution to this problem, this article covers:

Performance testing is used to measure the performance of an application or a system in terms of user load handling capacity, sustainability and responsiveness of the server. In today’s world, every client is keen on the user experience of the application. As per study if the website page is responded in more than 10 seconds then the user either terminates the page or moves out which directly impacts the revenue of the company. To meet the user expectations, companies are deeply concentrating on the responsiveness along with the user load-bearing capacity of the website.

Before moving ahead let’s understand the terms used in this article:

In 1954, John Little had published a paper in which he described the queueing theory by a new law. Later on, it is named as Little’s Law. He formulated 3 basic terms: average number of customers, customer arrival rate and the average time spent by a customer in the system.

Little’s Law Statement: The long-term average number L of customers in a stationary system is equal to the long-term average effective arrival rate λ multiplied by the average time W that a customer spends in the system. Expressed algebraically the law is:

Little’s Law in Performance Testing Term: The number of users (U) active on an application is equal to the rate of transactions (T) sent by the users multiplied by the average response time (R).

So, the formula becomes:

The above-mentioned formula based on Little’s law looks simple so what are the issues faced by a performance tester during test scenario creation and what is the need to make this formula more simplified and accurate?

The equation (1) does not satisfy the relationship between the metrics. Then what is missing?

To make the scenario realistic, a performance tester adds think time. As described above Think Time is the time taken by a real user to provide the input on a page. It includes the time required by a user to read the content of the page or fill the form or select a value from the given list etc. Let’s say 5 seconds is the think time which a user takes to read the content of each page and provides the input in the form of clicking the link or submitting the details. Since there are 5 pages (Home Page, Login Page, Search Product Page, Product Order Page and Logout Page), so the total think time will be 20 (= (5-1) X 5). The last page is a logout page which does not require think time. Hence 4 (= 5 -1) pages are considered. A point to be noted here is Think Time will also be considered as response time, so as per Little’s law the equation becomes

Still, something is missing which is restricted to satisfy the equation. Another key value which is called Pacing (delay between two journeys of a user) is used by a performance tester to achieve the desired TPS. Let’s consider 70 seconds is the pacing time which will also be included in the response time, so the equation becomes

Again, LHS is not equal to RHS and to equalize the equation 460 user load will be required which is not as per the client’s requirement. But after considering think time and pacing, the modified formula based on Little’s law becomes

This is a basic formula which a performance tester used for workload modelling, but when the result comes then they identify that the client’s expectation does not meet or more than expected load is generated on the server due to the wrong calculation. In such cases, they are bound to calculate the figures manually.

Reason behind the wrong calculation

After conducting my research on 50+ samples, I found that in Little’s law the average arrival rate and the waiting time is related to a person who is waiting in the queue. But this is not the case when performance testing metrics are calculated. When waiting time is referred then this is not the time of a single transaction, but that is the total time of user stayed on the website and complete his end to end journey i.e. from login to logout.

Here, another finding is that the given transaction rate belongs to 1 page, but the response time metric belongs to end-to-end journey (also called as iteration). Hence transaction per second should be divided by the number of pages to convert it into iterations per second. Hence:

Hence the modified formula for workload modelling in Performance Testing based on Little’s Law is:

Where was the problem?

As per Performance Testing standard, the number of expected users, transaction rate and response time are provided by Client (Project) during requirement gathering. These metrics are called as Non-Functional requirements. The number of transactions figure comes up once the script is finalized. The think time is an arbitrary value which depends on the nature of the page. In the practical scenario, 5 seconds think time is considered as a standard value. So, the extended formula is used to calculate the Pacing. Pacing is an important metric which can be adjusted to simulate an accurate workload model. The wrong pacing calculation directly impacts the expected user load and transaction rate. Therefore a true performance of the website cannot be identified. The newly derived formula provides the following benefits over the restriction of Little’s law:

Little’s law can be used for the queuing system, but in performance testing, other metrics also impact the equation and hence base formula does not calculate the correct figures for the workload model. Many performance testers still use manual calculation on the paper because they do not know the mathematical logic behind the law. Also, they are afraid of not meeting the SLA by calculating the figures using the original Little’s Law.

I did my research on this and collected 50+ samples to find out the problem and at last able to identify above-mentioned loopholes which were the root causes of miscalculation and came-up with a new formula. The extended form of Little’s Law will help all the performance testers to calculate the correct metrics in just a few seconds.